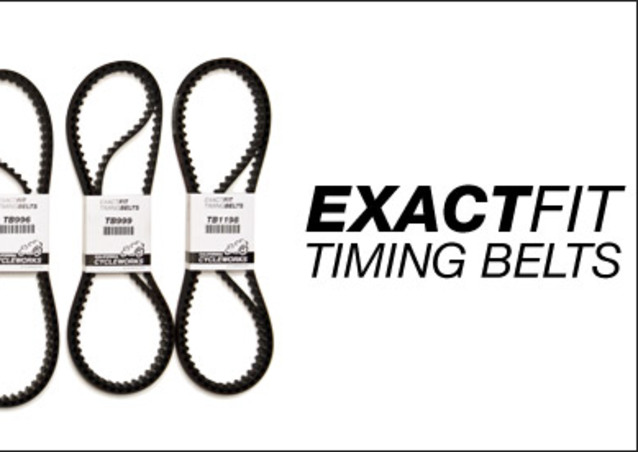 Scroll down for all our fitments:

ExactFit Belts are not well known in the UK yet so a few notes about them follow. It is common that when ExacFit enter new markets there are dissenters that dismiss them as being below standard and not as good as OEM so do search the internet – there is a lot of information out there on Ducati Forums world-wide proving this to be the opposite if anything!

Brought to the market several years ago in the USA by Chris Kelly of California Cycleworks, an ex Ducati Racer and true enthusiast – just like us at ExactUK!

Used at over 200 Dealers and Ducati Specialists in the USA – and main Dealers too!!!

Manufactured using ‘best industry practice’ with no cost cutting measures that are common in OEM products. Chris personally ensured the specification was the best possible.

Manufactured to ‘exacting’ tolerances and specifications – proving to be superior than OEM fitments on accuracy.

Tested by California Cycleworks and their Manufacturer against OEM belts and found to out-perform in strength tests hence the statement: equally fit for purpose as OEM belts.

Be careful out there: expensive OEM parts lead to cheap copies / OEM branded - so if you choose OEM make sure you buy from an authorised dealer – although we fully believe our belts are superior we understand some will only fit OEM due to the ‘scare stories’ – and they may in fact be persuaded that way by their mechanic, if he doesn’t know of our quality and reputation in the USA.

Some Main Ducati dealers are even selling older spec OEM belts on UK Ebay (in 2015) make sure you buy the improved later belts or ExactFit belts for peace of mind. They were upgraded for a reason! Our belts are equal to or superior in specification to the latest level belts in both strength and accuracy of manufacture. These older OEM belts may seem a good deal but understand what you are buying!

In 6+ years we have seen no failures of ExactFit belts in the USA due to the belt construction or quality – this has allowed California Cycleworks to build an enviable reputation over the years. Look upon us as the performance belt for your Ducati!

Remember OEM isn’t always best – the same as OEM recommended oils: which are recommended due to a commercially attractive deal as one of the main criteria employed.

Here is our fitment list across our full range of 10 different Ducati Timing Belts all of which are made to the same ‘best of industry practice’ as our base standard.

Ducati Specialists: contact us to offer your customers a quality & safe alternative to expensive Ducati Belts, which many look upon as an upgrade for a lower price.